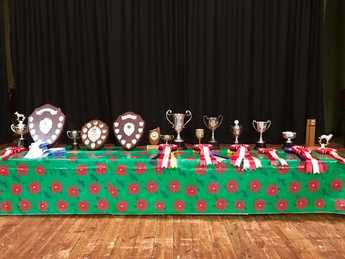 Our Annual Trophies and Awards

Once you are a member of Fleet & District Dog Training Society, you can compete for our annual awards and trophies. The Society offers trophies to adult and junior members during the “trophy year” which runs from 1st November to 31st October – the awards being made at the Christmas Party in December.

PEDIGREE OPEN TROPHY: for wins at Open and Limited Shows.

VETERAN TROPHY: for wins in veteran classes at any type of show.

JUNIOR HANDLING TROPHY: for wins in Junior Handling classes only, at any type of show.

COMPANION TROPHY: for wins in pedigree classes at Companion Shows.

Members wishing to enter should being their prize cards / rosettes, from Commended upwards, to training evenings when they will be made a note of by a committee members. Prizes will be awarded points and full details of these are available on the notice board. Cards / rosettes must be brought along for inclusion within a month of them being won.

Members must attend with their dogs and take part in the class, thus having their names entered in the register, at least once a calendar month. Points will not be included for a certain month if the member has not participated during that month.

JUNIOR PROGRESS TROPHY: awarded to the junior member who, in the opinion of the committee and the instructors, has made the most progress at classes during the year.

RINGCRAFT PROGRESS TROPHY: awarded to the members who, in the opinion of the committee and instructors, have made the most progress during the year.

RINGCRAFT ATTENDANCE TROPHY: awarded to the members who have attended the most classes during the year.

These trophies are offered in the spirit of friendly and fair competition and the final decision to whom they are awarded rests with the committee.

OBEDIENCE PROGRESS TROPHY: awarded to the members who, in the opinion of the committee and instructors, have made the most progress during the year.

OBEDIENCE ATTENDANCE TROPHY: awarded to the members who have attended the most classes during the year.

KARL KARNARVON TROPHY: for achievements in a working discipline.

​ICE BLUE MOOD SHIELD: awarded to a member who has made good progress training a rescued dog.

As with members' awards, these trophies are given in the spirit of friendly and fair competition. The committee's decision is final.